WORK, REST, WHAT WE WILL 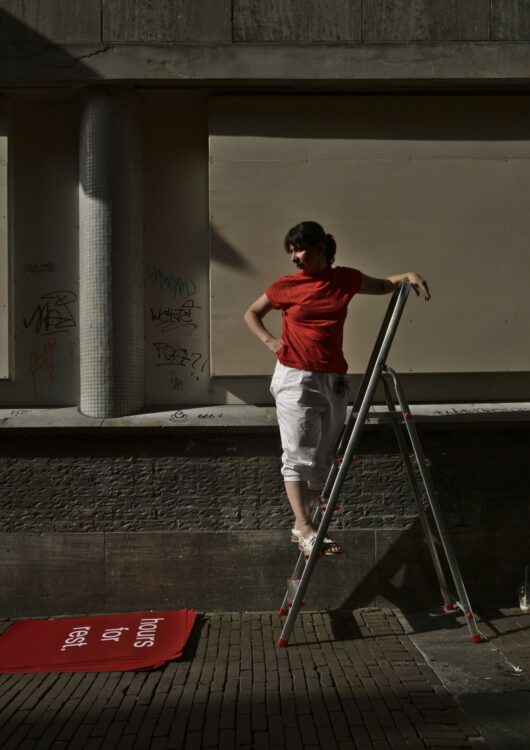 In September Alina Lupu is going to do a residency with us. She is no stranger to us, as she was a guest of ours in November last year as one of three artists on the evening of HEDEN: Humor in Neuhoorn, where she made quite the scene and put the moderator in a pretty tight spot. In the first week of September she will arrive in the AiR to do research and work on her project ‘Work, Rest, What We Will’.

Alina Lupu is originally from Romania, but today she lives and works in Amsterdam. She studied at the Rietveld Academy, and then she rolled into a job as food deliverer. She used this to voice her criticism towards the badly organized state of affairs in the creative sector when she was invited as an alumna to speak at the Rietveld Academy. The audience gazed in amazement when she came before them in a full delivery outfit, complete with the big bag and all. This action displays the tone her work would have during her artistic career. She often employs humor as a way to address contemporary issues, but usually also with a sharp edge.

During the residency at VHDG she will work on the project with the intermediary project name ‘Work, Rest, What We Will’. She is putting together a library called the Art Workers library, which is a living and growing organism that tries to accommodate ongoing conversations about the ties between labour and art, as well as the ways in which life and work intersect. With this library as a starting point Alina aims to investigate labour in the Frisian context during her stay here, which will be very relevant here in Friesland with its specific labour market. She will delve in the subject on a personal and social level, and will examine issues such as precarious working conditions and a basic income.

After the residence in September there will be a moment in 2023 in which Alina Lupu will present her findings.