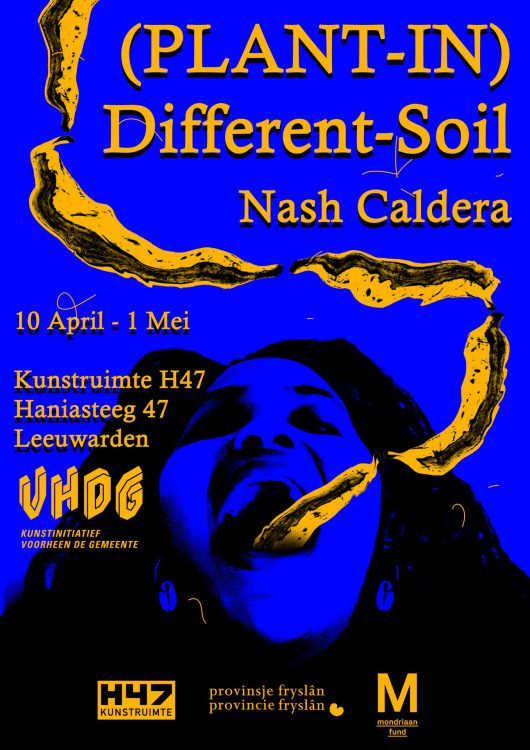 Expo: (plant-in)-different-soil Running like a thread through the exhibition by Najendra “Nash” Caldera is the ‘plantain’, in Dutch known as the ‘bakbanaan’ (baking banana). Nash thinks about the different metaphors, cultural connections and symbolical meanings of this plant. An important one is the parallel between the transporting of the plantain and the African diaspora, as well as the role the plantain occupies in daily life. Nash incorporates songs, folktales, personal visualizations and interpretations, and of course the plant itself.

During your visit to the exhibition you will immerse yourself in another world immediately after entering because you’ll be welcomed by a soundscape setting the atmosphere for the exhibition. Then there will be a varying array of works to be taken in, like several paintings, video’s and other visual works. For example, you could take a look at cooking videos that explore the trend of ASMR or a number of tapestries that embody Nash’s own vision on the subject.

So everyone, visit the exhibition (plant-in)-different-soil and follow in the footsteps of the plantain, with all the dark, beautiful and sometimes crazy aspects that are part of this journey. Prepare to be surprised, inspired, and made to reflect by Nash’s work. The plantain reproduces through the rhizome, which is in today’s philosophy also known as a concept for connectedness and relatedness. So besides the fact that there are a lot of different stories to be told about this fruit, in this way it also embodies a thread running through us all.

The ‘baking banana’ a.k.a. plantain The plantain is a family member of the banana, though a little bit less well known. A lot of people don’t even know the difference between the two. Maybe that has something to do with having to bake the banana before you can really eat it (hence the Dutch name), and takes a bit more effort to prepare. But despite all that, the plantain has a rich history, and in which you can discover a lot of interesting parallels, like with colonial history.

It originated in Asia and Oceania, was then introduced in Africa, still later found its way to South-America. Through there the fruit came to the Caribbean, now the main exporter of plantains worldwide, and became part of a lot of traditional recipes that are still being cooked today. With the recent increase of globalization the plantain is now also available in all of the western world, but still it seems a bit less integrated.

Plantain in culture Maybe you’re familiar with the song “Mister Don’t Touch The Banana”? That is a Cuban song, and the banana they’re singing of is actually also a plantain. They have a custom there of bringing food offers to the local deities, which are beautifully displayed on tables. So this is not meant for people, but once upon a time there was a man who wasn’t aware of this custom, and thought he’d grab a quick banana. The reaction to this is well illustrated in the song!

Between the journey the plantain has made and the history of slavery are interesting similarities to be seen, something Najendra noticed and decides to explore while in residency at VHDG. She employs a number of disciplines and uses the plantain to explore this history, and also her own history (Nash is from Curacao), but also from very different angles, like the role of the fruit in cultural traditions or the sexualization of it though trends like ‘mukbang’ or ASMR.